Askonas Holt is delighted to announce the European management of bass-baritone, Ryan Speedo Green, in partnership with Promethean Artists.

A native of Suffolk, Virginia, bass-baritone Ryan Speedo Green has quickly garnered an international reputation as a “breakthrough star”, appearing at many of the world’s most important opera houses and music festivals.

Operatic highlights of the 2019/20 season include a return to the Metropolitan Opera as Jake Porgy and Bess. For the Wiener Staatsoper he sings Raimondo Lucia di Lammermoor, Banquo Macbeth, Lodovico Otello and Titurel Parsifal, amongst others. Further ahead Speedo sings Rocco Fidelio for Washington National Opera and returns to the Metropolitan Opera for Commendatore Don Giovanni, Gesiterbote Die Frau ohne Schatten and Ferrando Il Trovatore.

Orchestral highlights for 2019/20 include Beethoven 9 with Sir Simon Rattle at the BBC Proms and The King in a concert performance of Aida for the Lanaudière Festival.

In 2016, Little, Brown & Company published ‘Sing for Your Life’, by New York Times journalist Daniel Bergner, telling the story of Mr Green’s personal and artistic journey to the Met stage. ‘Sing for Your Life’ has been honoured with a number of accolades, including the New York Times bestseller and editor’s choice, a Washington Post Notable Book, and a Publishers Weekly Book of the Year.

Amongst his many other awards, he is the winner of the 2014 George London Foundation Award, a 2014 Annenberg grant recipient, a 2014 Gerda Lissner Foundation First Prize winner and a finalist in the Palm Beach Opera Competition.

Taken from a Live in HD broadcast from the Metropolitan Opera, Ryan Speedo Green sings […]

Sing for Your Life

“Written with film like immediacy. … This book is so good. … And the key element—highlighted by the book’s subtitle, ‘A Story of Race, Music, and Family’—is Bergner’s tackling of issues of race.  With sensitivity and candor, he shows the subtle and not-so-subtle challenges the opera world poses to singers of color. … A vital, compelling and highly recommended book.” 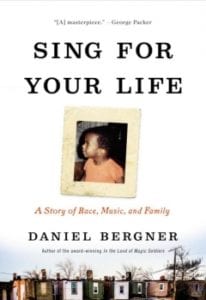 A Publishers Weekly Book of the Year

A Publishers Weekly Best Book of the Year