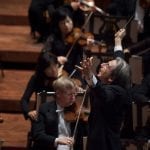 Ekaterina Semenchuk in the opening ceremony of ...