Update 30 January 2020: Boston Symphony Orchestra’s tour to Asia has been cancelled due to increasing concerns over widely documented official news and government agency reports assessing the spread of the new coronavirus. Read more.

For nearly fifty years, Askonas Holt has presented the Boston Symphony’s London concerts under such celebrated music directors as William Steinberg (1969) and Seiji Ozawa (1973), as well as European festival appearances with Bernard Haitink and Music Director Andris Nelsons, among others.

This February, the orchestra and Music Director Andris Nelsons will embark on an eight-date tour to Asia, marking our first tour to the region together. The orchestra will be joined by soloist Yefim Bronfman, performing in Seoul, Taipei, Hong Kong and Shanghai. 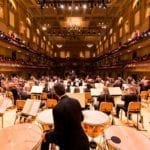 Boston Symphony Orchestra
We use cookies to ensure that we give you the best experience on our website.OkayFind out more