Daniel Pioro is a soloist, collaborative artist, and advocate for new and experimental music.

After making his debut at the BBC Proms in 2019, where his performance was described as “the most inventive and engaging” by The Daily Telegraph, Daniel continues to grow his international career.

The 2019/20 season sees him give the world premiere of Tom Coult’s first violin concerto with the BBC Philharmonic Orchestra and Ilan Volkov, and make his debut at the Barbican Centre performing a special arrangement of Vaughan Williams’ The Lark Ascending for violin, cello, viola da gamba and organ as part of their Contemporary Music series. Together with the Icelandic composer and producer Valgeir Sigurðsson, Daniel gives multiple electro-acoustic performances throughout the season, including his North American debut at the Big Ears Festival in 2020.

Daniel Pioro actively promotes new music and is interested in finding new ways of listening to and creating sound, as well as developing strong collaborations with composers, musicians, artists, and writers.

“Physical movement, the written and spoken word, colour, sound in all its many forms… they feed into one another and become greater for it.” 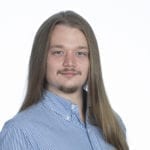 “It’s a beautiful thing when you can learn from your collaborators, but it’s not the key to creativity”

— Daniel Pioro in an interview with BBC, Mark Savage, 10 September 2019